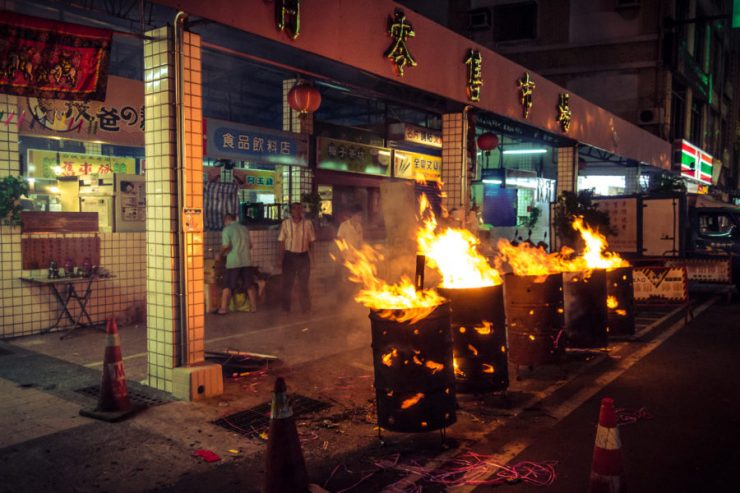 It was the late summer of 2000 and I was in Taichung, Taiwan sitting in Chinese class at Donghai University. My teacher began to talk about something called “Ghost Month.”

According to Daoist and Buddhist belief, the beginning of the seventh month of the lunar calendar marks the day when the gates of hell are opened and all ghosts and the spirits of deceased ancestors are released into the world to search for food, money, and pleasure.

The teacher began telling my classmates and I about all the things that we shouldn’t do during that month, like walking alone at night, whistling in the dark, and hanging clothes out to dry, because it might attract the spirits. And by golly, these were the very things that I had just started doing in order to adjust to life in Taiwan.

Doing it All Wrong

Coming from the cool Pacific Northwest, in the U.S.A., I was getting hammered by the heat and humidity of the Taiwanese summer days. And what better way to cool down than to take a lone, nighttime stroll through the beautiful, lamp-lit paths of Donghai University. I didn’t have a habit of whistling during those walks, instead I would hum or quietly sing comforting songs that reminded me of God, home, and things familiar. It was a time of repose, where I could escape the feeling of being trapped by the daytime heat, and crowds of people. It was cool, and open, and I felt like I could breathe.

I would make regular visits to the local laundry mat to wash my clothes because I didn’t have a washer and dryer in my studio apartment. But sometimes it was too inconvenient to do that for just one sweaty shirt. So I would wash it by hand and hang it up by the window or fan to dry.

Now I was being told that I shouldn’t do any of these things for fear of ghosts coming and haunting, possessing, or even harming me.

Other things we were warned against during Ghost Month included traveling, swimming, killing insects in our homes, turning around if tapped on the shoulder, making big purchases, and even getting married.

You Can’t Be Serious!

This all sounded crazy to me, my having come from a Christian background in rural America. I laughed and made jokes to the teacher and other classmates that now, in fact, was the perfect time to do those things because there would be less people around, and less crowds to deal with.

My light hearted comments were met with a mixture of laughter by some and seriousness by others. Some of these people actually believed this madness! I even heard from a classmate that he had seen a ghost while walking home to his dormitory at night, and he pointed to the place in the bushes where it had stood. It caused my heart to skip and sent shivers up my spine just hearing his story.

What freakish nonsense was all of this?! Even if there were ghosts, or demons lurking around on campus, why should I be afraid of them? After all, He that is in me is greater than he that is in the world. And God has not given us a spirit of fear, but of power and of love and of a sound mind.

Hearing what my teacher and classmate said had reminded me that the world we live in is not simply made up of what we can see. The Bible speaks of angels, and demons, and of powers in the heavenly places. But other than the occasional TV show of someone casting out a demon, or re-enactments of the like, I had just never seen manifestations of the spirit world while growing up. That was showtime, safely behind the boundary of the TV screen. And now, here I was, hearing it from people that I could touch and see. These non-Christian people truly believed in the spiritual world, and they were terrified by it.

Oh No! Not Again!

Fast forward 17 years. Yesterday our family was running errands in Taichung, and I had to drive my car in a snake-like pattern to dodge the blackened metal cans that billowed with flames of burning ghost money which littered the side of the road. What was with all the flaming garbage cans?! What day was today? It was the beginning of Ghost Month, and in these people’s eyes, the gates of the Under World were opened.

So they willingly stood out in the already blazing heat, creating even more heat by setting fire to fake spirit money, all in an effort to appease the angry spirits.

My emotions were a mixture of sadness, anger, and delight- Sadness at seeing so many people who were bound in their sin and fear; Anger at seeing fellow children of Adam who knew God, but did not honor him as God, and who were seeking their salvation and peace through works of piety, veneration, and celestial payment.

If Not For Grace

But that is not all He has done. The Lord has also given us the companionship of our eternal family. For God has decided to call people from every tribe, tongue, and nation- including many from Taiwan- and bring us out of the darkness and into the light. And when we worship, break bread, and fellowship together, we are reminded that there is more to this life than what our eyes can see.

In a great cosmic irony Christians can both follow and break the tenets of the Ghost Month at the same time. For if we walk alone in the dark of night we are not truly alone. And if we sing or whistle a tune to the Great Master of the Universe, we are joined by a great cloud of witnesses. And when we lay out our sinful, stained garments at His feet, we are clothed in Him instead.

So yes, there are hungry spirits that roam the earth and seek to devour the hearts of men. But One who is greater has come, and by the power of His Holy Spirit we are set free.


Why Pursuing Less is Better