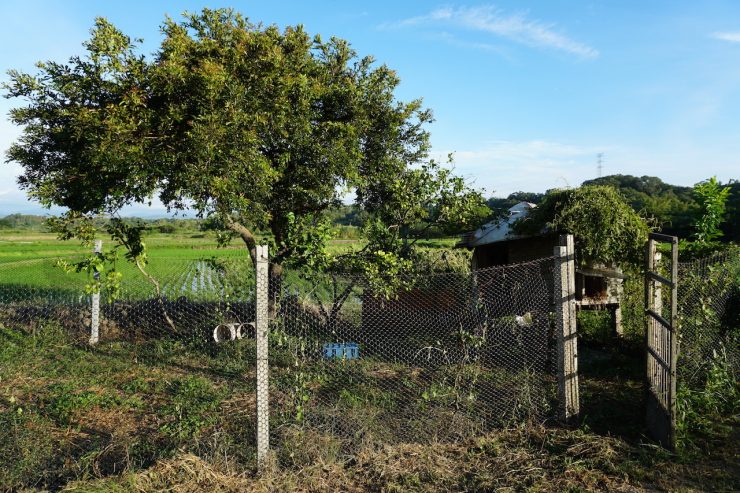 Not long after we first moved out to the Taiwanese countryside I spent several weeks building a chicken coop and pen. Looking back now, at all the work it took to complete, and the low quality materials I used, I probably should’ve done things differently.

Building With What I’ve Got

I was given a truck-load of well-worn wooden pallets from a family friend and I spent several days salvaging the good wood by prying out the nails with a crowbar and hammer, and popping off good pieces with a rubber mallet. If you placed a dollar value on my time, those boards would have cost a fortune.

But I already had done the work, and so with a pile of battered yet usable lumber I constructed a chicken coop with an open gable roof, and clapboard-style wood panels on the side to shed the rain. I dug 2 foot holes at even intervals in the dry, rocky ground and sunk 4 inch, squared concrete poles into the ground to mark the boundary of where my chicken pen would be. Then I stretched black, 5 1/2 ft high plastic chicken wire around the perimeter. After several weeks of sweating under the tropical sun, my beloved chicken dwelling was complete.

Happy With What It Gives

Despite the poor materials I used, and the incredible amount of time invested into that chicken coop, it has stood strong through 5 years of typhoons, blazing heat, intense humidity, creeping vines, and an endless barrage of ants that live in and around the chicken coop. It has housed dozens of chickens, which have given us endless amusement, laid piles of eggs, and have eventually graced our meal-time table with a fragrant, and delicious farewell.

Every summer our family goes back to the States for a few months, and upon our return I am presented with the same picture- a chicken coop and pen that resemble an abandoned old shack that seems to have been swallowed by years of neglect; of jungle vines seeping into every crack in the wooden siding, and their strong green fingers weaving through the fence’s checkered holes; of tangly weeds growing thick and woody near the base of the fence line; and colonies of black biting ants everywhere. With no chickens inside, and no one to maintain it’s upkeep, the chicken coop and pen become dark and wild. And though the chicken coop is teaming with small signs of life, the things that move inside it are as a creeping, suffocating reminder of death.

This morning, I spent what seemed like an eternity, though it was probably only 45 minutes, sweating under the pulsating sun, ripping, pulling, and cutting my way through the tangled weeds and vines that had grown up and around the coop and along the fence line over the summer. And so my goal was to clear everything out and make it habitable for a new batch of chickens.

Building What He Wants

When I was weeding along the fence line the heat and sweat mixed with explosions of dirt whenever I succeeded in pulling the weed’s stubborn roots from the ground. I couldn’t help but think how this was a perfect picture of my own life. How if given time and space, sin too would take root and send forth it’s life-sucking vines that would creep into every area of my heart and life. If it weren’t for the penetrating sunlight of God’s grace shining on me daily, and the Spirit’s faithful upkeep of my heart and mind, I too would grow wild and corrupt.

Yet God has been my builder and my keeper. He has taken the imperfect materials of my life and has started crafting them into something new, something habitable. He has set out the boundaries for me by making his ways and laws my delight, and giving me a holy hatred for what He hates. I still struggle with my sin on a daily basis. I sew the seeds of sin, water them a little, and then watch them grow. But God doesn’t leave me alone for a few months at a time. He faithfully comes in with the machete of His word, and the shovel of His conviction, ripping, pulling, cutting, and digging through the tangled mess that I have made. And when He’s through, I feel alive again.


Why Pursuing Less is Better