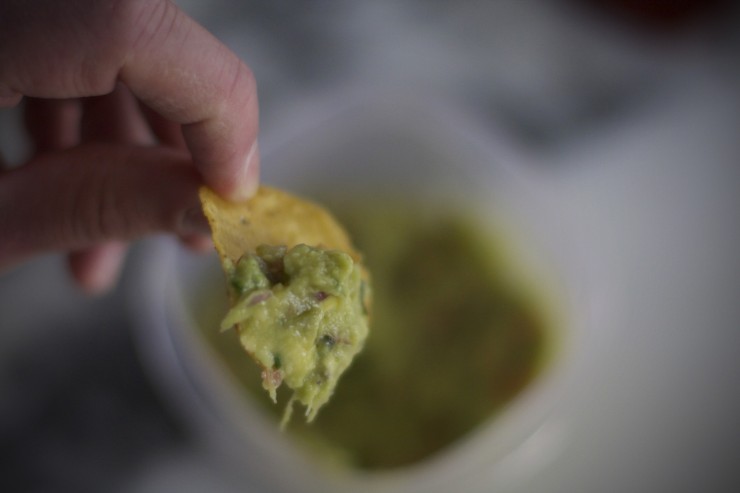 There’s not much better in this life than fresh guacamole generously slathered on salted, non-GMO corn chips. I remember the fond memories of when my mother would bring home Costco multi-packs of guacamole, that green creamy goodness, along with huge bags of crispy, salty, yellow corn chips. The magic that would happen when those two things danced together in my mouth was indescribable. Even today, just the thought of the creamy texture of guacamole, the garlic, onion, and salty flavors, surrounded by the roaring applause of crackling corn chips, as they too dive into guacamole bliss… it brings joy to my heart. Why? One- because it tastes SO good. And two- because I grew up on the stuff. I ate it so much of it growing up that it became a comfort food, like a close friend, and someone who’ll never let you down. I know that the moment I put that guacamole in my mouth, happiness and satisfaction will follow.

In many cultures around the world young children can be trained to like hot sauce, brewers yeast, bugs, organ meats, etc. How can they get their children to eat initially unpleasant things, even painful things, while most parents in prosperous countries cannot get their children to eat their vegetables? It all comes down to a determination of the will. Who will win the battle of the dinner table? God made children smaller than their parents for a reason. But many parents forget this advantage and give in to the annoying whines and squirming antics of their little ones.

If children were consistently given no other options at the table, and they were readily and happily disciplined for being picky or whining about the food, then they would quickly learn that it is better to submit to the parent’s will, instead of complaining and making things worse for themselves. But they continue to whine and squirm because it works!

We parents need to get our act together, and toughen up, “It’s this or nothing, buddy! And if you don’t eat it now, it’ll be waiting for you even colder the next meal.” We need to train our children to eat things that aren’t initially pleasing because it’s good for them- for their bodies and for their character. Or we might need to force them to eat certain things because our food sources are limited. Think of those who live in the arctic, where plants don’t grow most of the year. Or desert dwellers, who must survive off of camel and goat milk, dates, and scarce desert fruits.  Imagine how far little Ahmed’s complaints about goat’s milk would go when his family is surround by desert, and 200 miles away from the nearest marketplace? They are limited because of their environment.

We too can limit our children’s environments by not bringing the temptation home from the supermarket to begin with. Either don’t put it in your shopping cart at the store, or if you do bring it home, don’t give it to the children until they’ve eaten the real food first. And if they whine for it, don’t give in. Don’t reward bad behavior.  We create the environment for our children, and we should work hard to be consistent.

My wife and I love to eat spicy food, Thai food, chili sauce, kimchi, and the like. So out of an attempt to simplify our lives, and because we want our children to learn to enjoy the foods we love, we make them eat it. We add Kimchi to their breakfast eggs, hot sauce to some of their dishes, and even encourage them to eat spicy Thai curry. Still, we try to do it incrementally, so as not to overburden their tastebuds. We also feed our children fermented cod-liver oil! We know that even though it tastes fishy, it’ll help them to grow healthy and strong. We are creating the culture by limiting certain things, and providing plenty of what we like and what we think is good for us.  It’s amazing how flexible  children are, and willing to try new things… especially when we don’t give them any other choices. Cruel? No. Hard. Sometimes. But it’s always good for them.

Who is Training Who?

It’s an amazing thing, how strong attachments are established when we’re young. Parents need to remember that the standard that they set for their children in the home will often be the standard the children apply in their future homes. And once a habit or taste for something is acquired, it has sticking power throughout their lives. I don’t buy the argument that some parents give when they say that little Billy won’t eat his peas, and Suzie won’t eat her carrots. It simply means the parents have caved-in to the consistent whines of their children. They’ve tasted the sugary cereal, snacks, and pre-packaged food, and that’s what they want. Are you going to give it to them? Are you going to be consistent in your convictions, and follow through? Or is your child training you?!

Here’s the point- There’s a golden period of time when a child’s pallet, likes and dislikes, habits, and character can be easily molded. Once children have grown, they often forget the painful first encounters with nasty, yet healthy foods. And this principle applies not only to food preferences, it also applies to habits we want our children to grow to enjoy. It could be the habit of doing chores around the house, doing daily family devotions, going to church, raising animals, practicing hospitality, or anything for that matter.

The standard practices and habits in our daily lives will most likely become the standard for our children, as long as we are consistent. Those things will become the child’s bent and preference later on in life. God has made it clear that for parents there is much work to be done early on in a child’s life. We must train a child by setting a consistent and clear path while they are young, establishing patterns and habits to guide them through the rest of their lives. If no one is consistent and diligent with them now, what do you think will happen to them once they leave the home? Do you think they will learn self-denial, self-control, and other healthy habits when throughout their childhood they’ve been able to get what they want by whining?

We all know how hard it is to change our ways when we are older. We get more and more firm in our convictions. Our habits are ingrained. We like those things that give us pleasure. The ruts in the road are what is comfortable and familiar. To get out of them and start on a new course is bumpy, uncomfortable. It takes a great deal of conviction, will-power, and physical and mental energy. Even if we were to change our habits and tastes later on in life, the previous ruts remain nearby, always there for us to fall back into. It is easier to be trained when we’re young!

While the Children are Young

So friends, let us labor diligently while our children are still young, and we still have some fire in our belly! We want to point our children in the direction that will bring them the greatest good, and walk beside them while we still have a chance. We have a powerful influence over our children, for good or for bad. May we train our children’s pallet, their bodies, their habits, their minds, and their hearts to love what is best for them. And in so doing, start them on the right path, equip them with the right desires, and put some spring in their step!

What are some habits and practices you are trying to instill in your children? Please leave a comment below!