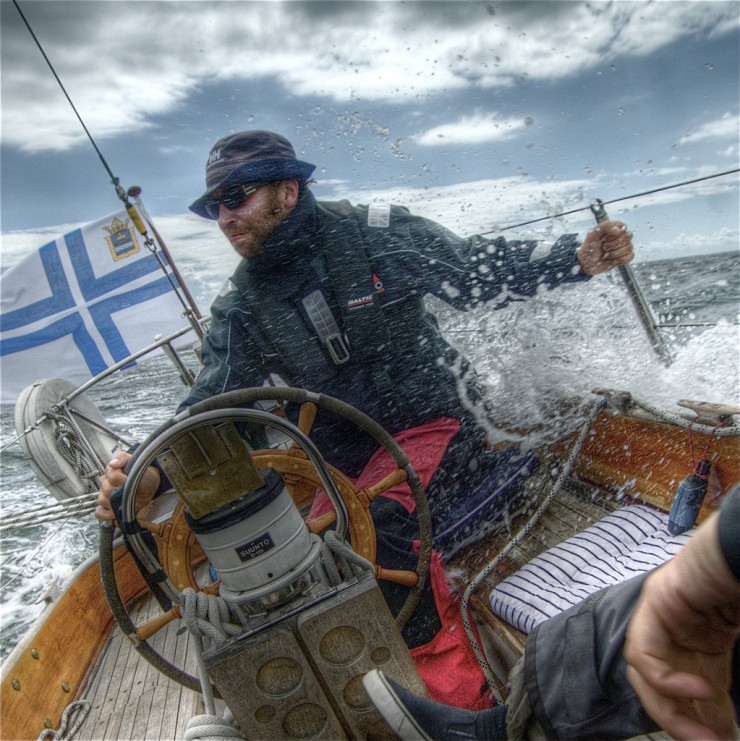 Does a guy have to have the physical strength of Rambo, the face of George Clooney, the bank account of Mark Zuckerberg, or the grit of John Wayne to be considered a true man? It all depends on who you ask. What’s your definition of manhood? Does manhood come naturally with age?

If you’ve watched any T.V. or spent any time online in the past year or so, then you’re probably aware that the world as we know it, at least that portrayed through the major media outlets, is in the middle of an identity crisis in which the traditional views on gender, roles, and sexuality are under attack. But it’s nothing new, really.  Ever since the Garden of Eden man has suffered from the effects sin, as well as its similarly-named cousin: “CIN,” or chronic identity neurosis (I just made that up). It all started when Adam, our greatest-of-great grandfathers, decided to go against God’s command and eat the forbidden fruit.

Why, oh why? Why did Adam give in so easily when Eve offered him the fruit that God so clearly said not to touch? And where was Adam in the first place… while his wife was being deceived by the deadliest, most eternally-poisonous serpent the world has ever known?  Alas, we cannot know the answer to these questions this side of Heaven. But we do see something interesting in how this sin effected Adam and Eve’s moral fiber. The two end up covering their nakedness with fig leaves, hide when God comes walking through the garden, and then start pointing the finger at each other and Satan for the sins that they just committed (Genesis 3:6-13). A classic case of man playing the part of God, instead of obedient creature, screwing up big time, and then pointing the finger at someone else. Folks, this identity crisis is ingrained in every man, and it’s been this way since the beginning of time.

One of the effect of man’s identity crisis is society’s  misunderstanding about when a boy becomes a man.  In some cultures there are rites of passage, and/or ceremonies signifying when someone goes from the childhood to the adulthood stage. In Christianity we have baptism, which is an external expression of our inward change in heart, and our new identity as children of God. But there is no Biblically prescribed sacrament or ceremony for passage into adulthood. It isn’t necessary. The Jews, on the other hand, have their Bar Mitzvahs for 12 year old boys. The older Amish children have their “Rumspringa” followed by a decision to either stay in or leave the church. And other cultures and groups have their own religious and non-religious rites of passage;  ranging from physical challenges, to more symbolic & spiritual ceremonies. While the act of telling a boy that they are now expected to be a man does have it’s merit, it’s another thing completely to actually train him in the disciplines and responsibilities of being a man.

The Bible speaks of two stages in life- “When I was a child, I talked like a child, I thought like a child, I reasoned like a child. When I became a man, I put the ways of childhood behind me.”  (1 Cor. 13:11) There you have it- there are children, and there are adults. Nothing in between. But in many modern societies we’ve added a new stage called adolescence, aka the “teenage” years- an imaginary period of time that begins around puberty, and ends when you’ve magically grown up…? This new stage permits children to enjoy many of the benefits of adulthood, while being free from the responsibilities that most adults have. Unfortunately, the clear line between childhood and adulthood has not been drawn in the sand for most young boys. Prolonged adolescence, encouraged immaturity, entertainment on demand, rampant addiction to pornography, a lousy work ethic, lack of self-discipline, the failure to train boys for responsible adulthood, and the changing standards in society have all led to a new generation of little boys who live in big men’s bodies. This bogus stage of life called “adolescence” is harmful, and needs to be done away with- it needs to be thrown into the abyss with a ball and chain around it’s feet, and then systematically nuked by swarms of submarines loaded with nuclear-tipped torpedoes. KABOOM! (Also, see Alex and Brett Harris’ book, “Do Hard Things,”  for a deeper look on how young adults can rebel against low expectations by learning to do hard things.)

The world sways like a pendulum when attempting to define manhood. On one side you have the crowd that says a boy becomes a man once he’s grown adult muscles & facial  hair; he’s tougher, stronger, more courageous; and doesn’t let others push him around; he calls the shots, shows others whose boss, and doesn’t cry. It’s a dog-eat-dog world out there, and a man is someone who learns to survive. This kind of guy is athletic, aggressive, talks loud, and indulges in the things he likes.  On the opposite side of the spectrum you have the crowd that says guys should do away with the tough-man image and embrace their feminine side. Guys should learn to communicate their feelings to others, and enjoy it (like women), not bottle up their emotions, not be so aggressive, speak softly, show more empathy, and cultivate a nurturing attitude toward others around them (As they hold hands in a group circle).  Men need to be more considerate, more sensitive, and stop acting so rough.

But the world’s “Manhood-Pendulum” is special because it has another axis, where it swings between the “funny” persona of Home Improvement’s Tim Allen, to the omniscient Jason Borne, from the Borne Identity trilogy.  And so we try to impress everyone as we dance between being tough and sensitive, funny yet brilliant.  We don’t want to come off as sissy or uncool to the guys, and we definitely don’t want to be seen as dumb, weak, or boring to women folk. What’s a man to do? It’s a constantly moving target. It’s like trying to shoot a pea-sized target, painted on an inflated, untied balloon, as it’s released into the air, flapping as it goes, “Fffffaaaaattttt… Chhhhaaaancccceeee….!” Even if we were to miraculously hit the world’s moving target, it’d be all for naught. The target is meaningless in God’s eyes.

There are so many conflicting voices and opinions in society. What we need is a true and unwavering standard of manhood to which all boys and men can aspire- a steady target to aim at.  I’m happy to say that God has already given us a standard to follow in our pursuit of genuine masculinity. And it’s found in the example of Jesus Christ. God humbled himself, took on flesh and bone, came and served sinners, lived a perfect life, and then died in our place that we might be forgiven of our sins, and live with Him for all eternity. He led, served, taught, forgave, and healed all those around Him. He provided us with the life-giving words of the Gospel; the power, comfort, conviction, and fruits of the Holy Spirit; along with repentance, faith, and salvation. And He keeps us alive- “for it’s in Him that we live and move and have our being” (Acts 17:18). He protects us from the wrath that is to come, the wages of our sin, the attacks of the enemy, and the snares of the world. And though we will never hit the Biblical-manhood mark dead-center, we can keep our eyes on that target through the scope of the Bible, while depending on the steady strength and grace of God.

I believe that a boy becomes a true man when he puts his trust in God, and, as John Piper wrote in “Recovering Biblical Manhood and Womanhood,” cultivates a strong, “…sense of benevolent responsibility to lead, provide for, and protect women in ways appropriate to his differing relationships.” This definition of manhood does not require that a man be married, reach a certain level of physical strength, have millions of dollars in the bank, or embrace any of society’s twisted expectations. Our prime example of manhood is not portrayed on T.V. or in the movies. The world does not accept the true image of manhood, for it killed Jesus and the prophets. Our manly calling is not one adorned with Earthly glory and praise, but rather a humble, and persistent, and radical calling to follow Christ, and die to ourselves! To love, serve, lead, provide for, and protect others, regardless of their willingness to follow or agree with us. Our Commander-in-Chief is Christ Himself. We get our marching orders from Him. May He help us to “Be on the watch, unmoved in the faith, and be strong like men.” (1 Cor. 16:13)  Thank God for sending Him to come down and show us how to be real men.  May God help us to reject the world’s definition of manhood, that old path set out for us by our first forefather in the Garden of Eden, and instead follow in Jesus’ footsteps, the true Alpha-and-Omega-Man.